“Equity” is a professional actors organization. Among a number of worth causes, Equity has taken on the job of helping inform the public about AIDS through their craft.
I attended one such event in Boston last December 2007 and just now I am at a point where I can write about it . It was a mixture of acting and music. the four actors from Emerson College had interviewed AIDS patients and then created a monologue to present to the audience.
The performances were moving, sad, real, comical, offensive, they made you angry … all the emotions at the same time.
I stood in the back of the dimly lit room and shot a few images just to document the event. I have also attached a short video of the program at the end of this blog. You should watch it. After the presentation, there was a reception. You see all of the people portrayed were there, they were there to see their story told and to share that evening with the actors. But there wasn’t much saddness in the room. It was a more a feeling of respect.
Remember … watch the video , the link is below. 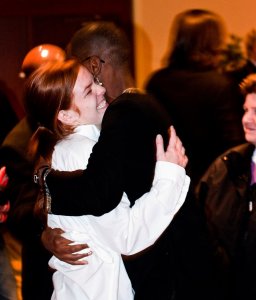