Many artists agree that there is beauty in life’s candid moments.

Many years ago I learned an important lesson about capturing the beauty of the candid moment.  Look behind you, because stuff is happening there too.

I photographed this image recently at a backyard party. Everywhere you look in this image, there is something happening.  Small groups of people having conversations, laughing, some discussing more serious subjects, some are looking away, ready to move on to the next group and their next discussion.

So, even though this image is dark and grainy (shot at ISO 32000!), it caught my attention. You see, it’s not always the image with the perfect exposure and perfect pose that makes it precious, but the contect of the image itself.

For your Senior Portraits why not go for Timeless … and Confident … and Freaking WOW!

Because you deserve memorable images of this milestone in your life that will be cherished for generations.

Dan Busler is the owner and principal photographer for Dan Busler Photography which specializes in portrait, live performance, event and commercial photography from their studios in East Walpole, MA and on location.

He has photographed performances by The Boston Opera Collaborative, Longy School of Music, The Extended Play Sessions and The Boston Camerata, and events for Liberty Mutual Insurance, Franciscan Children’s and Travis Roy Foundation.

“A Day in the Life” photo session is just that. From the time you get up until you go to bed, your day is filled with life.

And as normal and regular you might think it is, there’s a heck of a lot going on. Then you add other people ( spouse, kids, friends, co-workers) and the stuff you do ( hang out, play, talk, laugh, cry, yell, play in the pool, read the paper … get interrupted, eat, feed the cat, take a walk, look at some flowers and show them to your kids, pick those flowers to bring home to your spouse, see their reaction, get a hug and kiss … you see where this is going, your life is awesome!)

OK, so now you’ve got all these epic “day in the life” pictures of your awesome life what are you going to do with them?

First, realize how nice these captured memories of this epic day will be to look at in a month. Then realize how great they will be to look at in a year and how precious they will be in 10 years ,,, and 30 years when your kids are Grandparents and in 60 years when you are gone. They are no longer nice, or normal or just snapshots, they are so precious that the album they’re in is put carefully in a special box.

I offer “day in the life” sessions and they are truly heartwarming and real and full of all the borning moments that will one day be precious memories. 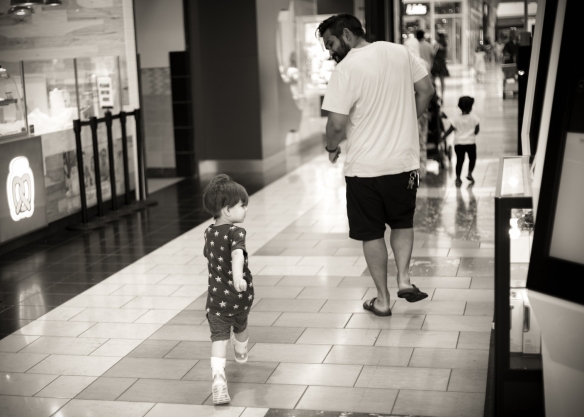 Dan Busler is a full service Boston-based professional Portrait, Live Performance and Event photographer with studios located in the historic Hogie Bear Building – East Walpole MA 02032 By the Artist, for the Artist. 781-352-4863 http://www.danbuslerphotography.com

When I’m preparing to photograph a family’s portrait I ask them two things “where will the prints be hung?” and “what do you want the photo to say about your family?”.

The first question is easy to answer “It will be hung in our formal sitting room, over our vintage baby grand, illuminated by color corrected museum lighting”,  or “We’re going to hang it in the family room, right above the pool table beside our other photos of the family”.

Personality, the true family dynamic, the bond that comes from relying on each other through thick and thin, good grades and bad, good haircuts and bad is hard to capture early on in the session.

This image is my favorite from the session with this beautiful family. It’s classic, timeless and worthy of being passed down for generations.

But it wasn’t until they all changed into black T-shirts toward the end of our session did I see them relax. They became so comfortable because they weren’t posing as much as they were a family just being family.

Epic images, all of them.

Dan Busler is a full service Boston-based professional Portrait, Live Performance and Event photographer with studios located in the historic Hogie Bear Building – East Walpole MA 02032 By the Artist, for the Artist. 781-352-4863 http://www.danbuslerphotography.com

As a professional photographer there are certain times of the year;  the holiday season being one of them.

It really is that most wonderful time of the year when we bring everyone together to share the love and friendship of the holiday season and take the annual Family Portrait.

This year we see a new trend; the Family (selfie) portrait. Now everybody say CHEESE ! You guys look Fabulous !

I’ve been planning to write this post on procrastination for some time now, but I kept putting it off. But something always caught my attention on my way to write it and I just ended up doing that other thing instead.

I was born in mid-March, smack dab between the Ides of March and St Patrick’s Day, so I am a Pisces. They (meaning Google) say that I’m a dreamer … (but I’m not the only one),  easily distracted, live in a fantasy land, I’m totally scattered,  and I won’t face reality. Many who know me are nodding “yes” as they read this. My family loves me for who I am .. well, I think that they do anyway. And my fellow  Pisces are agreeing .. “yea, that’s me”.

Does this make us procrastinators?   Well we certainly appear that way. Maybe we’re just good planners … always sitting and thinking ( aka “daydreaming”) .. looking at it from all angles, weighing the options, summing up our findings and preparing to move forward with the best course of action ….

So this brings me to the Procrastinator Fix … lists .  If I don’t have a list, nothing gets done.  And I don’t mean a “to do list” , that’s for normal people , this has got to be a running list of all the things that I see that need to be done.

Here’s how it works – each morning  you’d write down what you want to get done that  day, number them in order of importance and then you can get out of bed. ( this is the normal part .. like a normal person would do).  Then as the Pisces mind starts to run you see a million other things that you see that have to do right that second.

Well, unless it’s pick up a sock and put it in the hamper, put all these random tasks  you’ve just thought up on the list and start as you had planned on the most important task .. the one that you marked as number one .. before you got out of bed.  Sure you can re-number your tasks to include these new tasks, but don’t just do them as you think of them. … Because you might just be .. Procrastinating. Or attention .. challenged. It’s probably a little of both.

I plan on taking my own advice, one day, if I could only stop putting it off.

Dan Busler is a professional photographer specializing on portrait, performance and event photography and camera basics instructor with studios located south of Boston in Walpole MA. Examples of his work can be seen at http://www.danbuslerphotography.com

Dan Busler is a professional portrait, performance and event photographer with studios located south of Boston in Walpole MA. You can see more of his work at http://www.danbuslerphotography.com

“The Adams Farm property includes approximately 365 acres of town-owned land, additional acreage held in adjacent land conservation trusts, and land owned by the New England Forestry Foundation and the Norfolk County Agricultural School, for a total of over 700 acres open to the public for low-impact recreation”

There is a butterfly garden with a special section along the back fence devoted to milkweed to provide a habitat for monarch butterflies. Although I was there in March 2016 .. so everything was kind of brown

But soon the grass will sprout and the birds will be singing and the butterflies will be .. doing what they do.

If you want a peaceful place – this is it.

Families walk the fields and paths at Adams Farm

The clearly marked walking paths lead into the woods

The paths into the woods are clearly marked and so peaceful

The bench at the far side of the field

The plaque on the bench

The view from the bench

The signs are right to the point – if the dog poops .. you have to clean it up ! HA!

Dan Busler is a professional portrait, performance and event photographer with studios located south of Boston in Walpole MA. You can see more of his work at http://www.danbuslerphotography.com